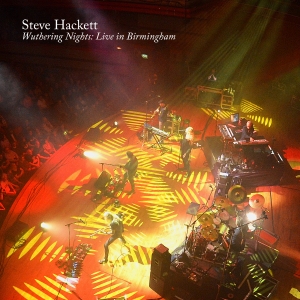 These days, guitarist Steve Hackett’s performances both on record and live are the closest to the classic sound of his former band Genesis one will ever to experience. His soaring guitar work and complex compositions still hearken back to Genesis’ progressive/art rock period from 1971 to 1977. A consistent solo artist in his own right, Hackett has been performing the music he made with Genesis with the Genesis Revisited shows in the last several years. On the 40th anniversary of the band’s Wind and Wuthering album from last year, Hackett mounted a tour that not only paid tribute to that record, but also showcased other Genesis classics and his own solo work, including his most recent studio album The Night Siren—all of which forms the basis of Wuthering Nights, a new 2-CD/1-BluRay live recording. Hackett and his own group’s renditions of some of Wind and Wuthering‘s songs – “One for the Vine,” “Afterglow,” “Blood on the Rooftops,” “In That Quiet Earth,” “Dance on a Volcano,” and “Eleventh Earl of Mar” – are almost letter perfect compared to the original versions; other Genesis epics including “Firth of Fifth” (the ultimate Hackett guitar performance showcase), “The Musical Box,” and the grand finale “Los Endos” appear in the set list. Hackett’s solo work are give prominence as well, from tracks like the bright-sounding set opener “Every Day” and the foreboding “The Steppes,” to more recent works like “Behind the Smoke” and the dramatic “El Nino.” Aside from Hackett’s signature complex and lyrical guitar heroics, the other musicians from the band – drummer Gary O’Toole; bassist Nick Beggs; keyboardist Roger King; woodwinds player Rob Townsend; and singer Nad Sylvan, who eerily sounds like both Peter Gabriel and Phil Collins – stand out with their performances. For fans too young to hear the old Genesis songs from the classic lineup era, or just want some pure great progressive rock, period – Hackett’s Wuthering Nights delivers the goods.