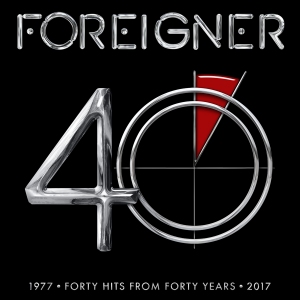 Whether you love it or not, the music of Foreigner has been a part of our lives for the last four decades. The band’s slick hard rock tunes and power ballads—“Waiting for a Girl Like You,” “Cold as Ice,” “I Want to Know What Love Is,” and “Hot Blooded” are just some of them– are so ubiquitous not only on AOR/classic rock radio, but pretty much anywhere that plays music, whether it’s at the local bar, pharmacy, or sporting event. There’s no denying Foreigner’s catchy hooks and go-for-the-gut sensibilities, all of them a testament to the perseverance and genius of the band’s guitarist and driving force, Mick Jones–even if its economical, no-frills rock has earned the band the somewhat unfair label of corporate rock.

This year is the 40th anniversary of the release of Foreigner’s self-titled debut record. And marking that milestone is this latest 2-CD greatest hits compilation, simply called 40, which collects 40 (get it?) of the band’s hits (Its title and artwork are a nod to the band’s 1981 smash album 4). There have been previously similar Foreigner double-disc packages (Jukebox Heroes and No End in Sight), but 40 is the most current by including the band’s recent recordings in the last several years, including tracks from the album 2009 album Can’t Slow Down and the group’s recent single “The Flame Still Burns.”

Foreigner’s peak period occurred from 1977 to 1987 as represented on all of disc one and the first couple tracks on disc two of 40. It is a rags-to-riches story for British journeyman guitarist Mick Jones, who got his start playing for Johnny Halliday (known as the French Elvis) during the ’60s and then later joining the rock band Spooky Tooth in the early ’70s. Then in 1976, Jones and multi-instrumentalist Ian McDonald (King Crimson) formed Foreigner with a group of British and American musicians, including singer Lou Gramm, who would become an important foil to Jones for the next three decades. Right off the bat, the self-titled Foreigner album was an immediate success, featuring tracks that have since become Foreigner standards (“Cold as Ice,” “Long Long Way from Home,” “Feels Like the First Time”), and the band immediately hit the arena rock tour circuit. The group followed that up with the even more successful Double Vision, which yielded the title song, “Hot Blooded,” and the Beatles-sounding “Blue Morning Blue Day.”

The band experienced a bit of a creative slump with 1979’s Head Games, even though it had a hit in title track. With the six-man lineup reduced to a quartet by 1981, Foreigner released 4. Co-produced by Robert John “Mutt” Lange, 4‘s streamlined rock sound paid off big time for the band, with “Waiting for a Girl Like You,” a ballad that spent an amazing 10 weeks at the number two position on the Billboard singles chart); the album also contained memorable hits in “Urgent” and “Jukebox Hero.” The band finally scored its first and only number one song with “I Wanna Know What Love Is,” from 1984’s Agent Provocateur, which cemented the group’s reputation in the power ballad genre.

By 1987’s Inside Information, an album that relied heavily on a synthesizer-driven sound, the relationship between Jones and Gramm came to a head, with the latter leaving to pursue a solo career. Jones soldiered on with new singer Johnny Edwards; this new incarnation of Foreigner recorded the criminally-underrated 1991’s Unusual Heat (whose song “Lowdown and Dirty” is included on 40), which didn’t fare well on the charts. Realizing they needed each other at that point in their careers, Jones and Gramm reunited and released Mr. Moonlight in 1995 (“Rain,” “White Lie”). Gramm bowed out again in 2005 and was replaced by Kelly Hansen, who vocally was a dead ringer for his predecessor, and thus ensuring some continuity. While Foreigner’s singles in the last couple of years haven’t burned the charts as they did in the prime years, tracks like “Too Late,” “In Pieces,” “Can’t Slow Down” and “The Flame Still Burns” still mined the band’s tried and true formula of guitar-driven rock, infectious melodies, and gritty yet soulful vocals. Two newly-recorded songs round out 40–the power ballad “Give Up My Life For You,” and a re-recording “I Don’t Want to Live Without You”–providing proof that the band still has a bit of the old magic and spark left.

Casual fans who pick up 40 will most likely gravitate towards the first disc naturally because it has all of the well-known hits featuring Gramm (dubbed at one time the “Pavarotti of the power rock ballad”). But hopefully those same fans will also appreciate the tracks on disc two sung by Hansen, as he’s certainly a more than capable singer on the old and new material; Jones, an underrated rock guitarist and producer in his own right, can still write a rocker or power ballad with ease. 40 is a well-rounded overview of hits that even the most jaded indie music fan who hates classic rock will admit those Foreigner songs have an ability to sink in their hooks.