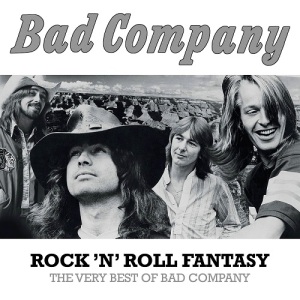 Thirty years after the first Bad Company compilation, 10 from 6,  and 16 years after The Original Bad Company Anthology, comes a newer chronicle of the classic AOR rock band’s music. Rock and Roll Fantasy pretty much packs in all the great hits (although I personally bemoan the exclusion of “Silver Blue and Gold,” one of my personal favorites) from a group that really delivered straightforward, reliable meat-and-potatoes rock with pronounced country, blues and soul influences. Almost every song from this new collection has been played endlessly on classic rock stations and jukeboxes in bars: “Can’t Get Enough,” “Bad Company,” “Feeling Like Makin’ Love,” “Shooting Star,” and “Rock and Roll Fantasy”– all of them highlighted by the compelling vocals of Paul Rodgers and the recognizable guitar riffs by Mick Ralphs. Asides from the hits are some deep cuts that warrant a new appreciation like the outlaw-ish “Live for the Music,” the funky “Rhythm Machine,” and the haunting, melancholy of “Electricland.” Two previously unreleased versions of “See the Sunlight” and “Easy on My Soul” grace this set. While certainly not often talked about, Bad Company’s influence can be felt on many future classic rock acts, including Foreigner, Kid Rock and the Black Crowes. The music of Bad Company prove you can say so much more just by sticking to the basics.