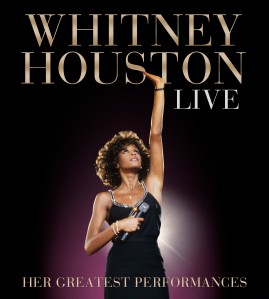 “We won’t forget that name—Whitney Houston!” said an amazed Merv Griffin at the end of a startling performance of “Home” by an unknown 19-year-old named Whitney Houston on his TV show from 1983. Those words couldn’t have been more prophetic about the future of one of the greatest singers in pop music history. It’s hard to believe that that the diva never released a live album during her lifetime, but now her triumphant performances are now collected here: from the aforementioned Merv Griffin appearance to “I Didn’t Know My Own Strength” on The Oprah Winfrey Show in 2009. (The DVD portion of the set features her duet with Mariah Carey on “When You Believe” from the 1999 Academy Awards). They’re evidence that Houston’s range and delivery went beyond the just recording studio – she truly projected those talents and gifts in front of an audience. That is especially true of the ballads included here such as “Greatest Love of All” and of course “I Will Always Love You” (from the 1994 Concert for a New South Africa). While certainly love songs were her forte, Houston also delivered some spark on the more uptempo fare such as “I Wanna Dance With Somebody (Who Loves Me)” from Arista’s 15th Anniversary concert in 1990; “How Will I Know” from the 1985 Brit Awards; and “I’m Every Woman, from the same South Africa show. There are some interesting revelations from the set: “You Give Good Love” from a 1985 appearance on The Tonight Show Starring Johnny Carson is a bit stripped down from the gloss of the original studio version, but the smoldering performance remained; a medley of “I Loves You Porgy,” “And I’m Telling You I’m Not Going,” and “I Have Nothing.” Of course, it would be criminal if this live anthology didn’t include Houston legendary rendition of “The Star Spangled Banner” from Super Bowl XXV in 1991 – it was a performance that was historically memorable as – if not more than – the actual game itself. Houston’s remarkable studio output stands by itself, but Her Greatest Performances is a fitting document of what a compelling and charismatic performer she was on stage.