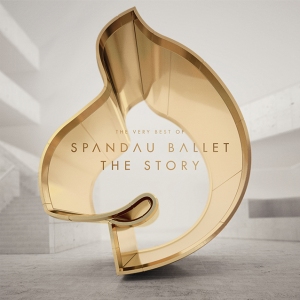 Compared to Duran Duran and Culture Club, Spandau Ballet may not have had the meteoric success in the States as those groups from the British New Romantic era did. But upon close examination, Spandau’s overall body of work has its merits. While the band certainly had tremendous success in its native U.K., Spandau is somewhat under appreciated here in America, despite its famous ballad “True” hitting the Top 10. But now with the arrival of the recent film band documentary Soul Boys of the Western World and this new compilation, it seems the time is right for a reevaluation of Spandau’s career — marked by the songwriting genius of Gary Kemp and the dramatic singing of Tony Hadley. Based on a cursory listen of The Story, it might surprise casual American listeners who only know Spandau for its sleek soul-boy reputation to hear the earlier stuff where it was kind of like post-punk New Wave from “To Cut a Long Story Short”; the Germanic-sounding “Musclebound”; and the funky “Chant No 1.” Then came the massively successful True album – the band’s undisputed masterpiece –  which established the band’s trademark sound as we know it; the title song still remains timeless as one of the best ballads ever — one that has been covered by other artists including Paul Anka, and being sampled by P.M. Dawn. From there on, the band fused sweeping rock and soul on later endeavors such as “Only When You Leave,” “I’ll Fly For You,” and “Through the Barricades.” After 20 years apart, the members of Spandau Ballet reunited, and to show that this isn’t a one-off thing, The Story features three new romantic-sounding songs “This is the Love,” “Steal” and “Soul Boy” (which sounds musical in spirit to “Gold”), produced by Trevor Horn – all of which both harken back to Spandau’s glories and yet still sound fresh in the 21st century. As this hits collection with the new songs demonstrates, the story on Spandau Ballet isn’t over yet, but rather the beginning of a new chapter.