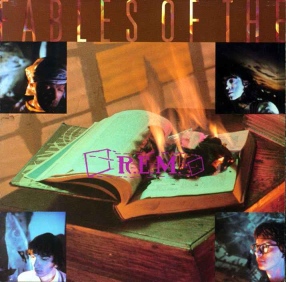 R.E.M.
Fables of the Reconstruction
IRS/Capitol
By David Chiu

Following the recent expanded editions of Murmur and Reckoning, R.E.M.’s third album, 1985’s Fables of the Reconstruction, is given the deluxe treatment as a lavishly, packaged two-disc set. While it may not be a stylistic departure from the band’s first two albums, Fables (produced by Joe Boyd) maintains the early R.E.M. sound of jangly pop that echoes Big Star and the Byrds. The album is best known for the classic pair “Driver 8” and the funky “Can’t Get There From Here,” but the rest of the album’s songs should not be overlooked, especially “Feeling Gravity’s Pull” (with its ominous yet irresistible opening guitar line) “Old Man Kensey,” the elegant ballad “Wendell Gee,” and “Kohoutek.” The second disc contains demos of the album’s songs and a previously unreleased track, “Throw Those Trolls Away.”