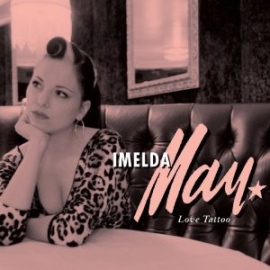 Irish singer and bodhran player Imelda May is a throwback to several past musical styles: ’50s and ’60s rock and pop, swing, jazz and rhythm and blues. They are all on her full-length album Love Tattoo (which had been already released overseas two years ago, before making its American debut last year). May is a tremendous singer who can be very feisty in one song (the jazzy, big band sound of “Johnny Got a Room” and “Smokers Song,” and torchy and tender in the other (“Meet You at the Moon,” “Knock 123”). In between are some nodsto the past: the intro “Wild About My Lovin'” is reminiscent of the Beatles’ “Doctor Robert,” while the rest of the song sounds like vintage Nancy Sinatra; and the title track could’ve been a classic Elvis tune. May delivers a terffic performance as well as her band. For fans of the old school, traditional pop, music, Love Tattoo will knock you out.