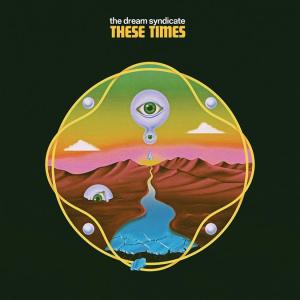 The Dream Syndicate
These Times
Anti-
by David Chiu

It’s one thing to release a new album after a 30-year hiatus, but it’s another to put out a follow-up record so quickly afterwards. That’s what veteran alt-rock group the Dream Syndicate, led by singer-guitarist Steve Wynn, did with These Times, a moodier-sounding companion album to 2017’s reunion record How Did I Find Myself Here? It’s a a welcomed continuation of the group’s creative roll  that finds them forging ahead rather than cashing-in on Paisley Underground nostalgia. While it doesn’t dramatically stray from the driving and expansive guitar-dominated sound of the Syndicate’s previous albums, These Times incorporates electronic textures that lend an atmospheric and moody sound, which is evident on tracks like the almost-danceable “Black Light,” the buzzing track “The Way In,” and the punkish and psychedelic “Put Some Miles On.” The new record is not short on intense rockers like Highway 61 -era Dylan on “Speedway” and “Recovery Mode”– but there’s also some reflective and dreamy numbers like the lovely “Bullet Holes,” “ Still Here Now,” and the finale “Treading Water Underneath the Stars.” Of course, a Dream Syndicate album wouldn’t complete without an extended-jam-like tack in the tradition of epic numbers like “John Coltrane Stereo Blues” and “The Days of Wine and Roses,” and that’s covered on the groove-oriented “The Whole World Is Watching.” As evident on this record and the previous, this line up of the Dream Syndicate – Wynn, drummer Dennis Duck, guitarist Jason Victor and bassist Mark Walton– is the best in the groups, sounding quite vital even as they convey a world-weary perspective that befits the album’s title.