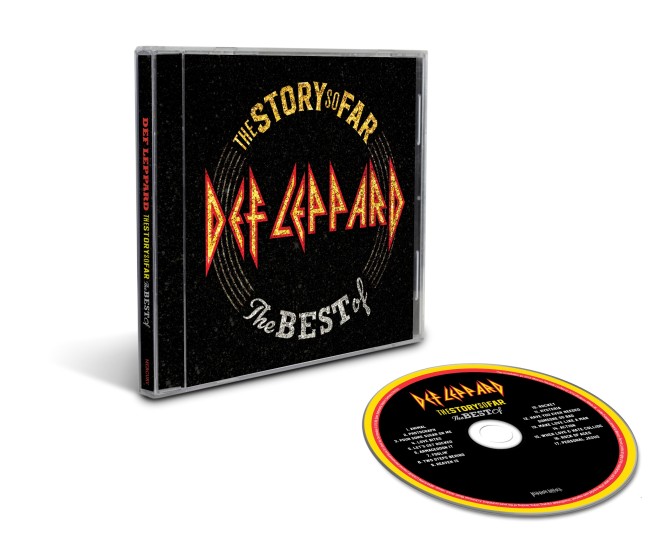 Def Leppard
The Story So Far: The Best of
UMe
by David Chiu

The timing of this new Def Leppard compilation couldn’t have arrived at a better time this year as the band was recently nominated for induction into the Rock and Roll Hall of Fame. Of all the best-of packages out there of’ the Sheffield legends’ music, The Story So Far is the most up to date, featuring tracks from the last few records Yeah!, Songs from the Sparkle Lounge, Mirror Ball, and Def Leppard. Die-hard fans may quibble an omission of a personal favorite here and there (no tracks from the band’s 1980 debut On Through the Night are represented on this set), but for the most part The Story So Far has all the best known hits by the pop metal group—with the choice selections from the mega-platinum albums Pyromania and Hysteria (i.e. “Photograph,” “Rock of Ages,” “Foolin’” “Pour Some Sugar on Me,” “Animal,” “Love Bites,” “Hysteria,” “Rocket,”and “Armageddon It”). All of those aforementioned smash hits—collectively the soundtrack of the pop metal ’80s – carry the band’s hallmarks of catchy melodies and the state-of-the-art, over-the-top production by Robert John ‘Mutt’ Lange, who in essence was the sixth member of Def Leppard. For the casual fans who never got past the Pyromania/Hysteria/Adrenalize eras of Def Leppard, The Story So Far is an opportunity for them to rediscover the latter-day works that doesn’t try to rehash the group’s previous winning hit formula of its peak years (with the exception of “Promises” from 1999’s Euphoria) or Lange’s production, but rather the songs from the last 20 years sound more direct and stripped down, even at times branching out stylistically. Disc two of this two-CD set makes a strong case for reevaluation on some worthy standouts, including “Now,” “C’mon Cmon,” “Nine Lives” (with Tim McGraw), Badfinger’s “No Matter What,” and the very majestic Queen-esque power ballad “Kings of the World.” New to this compilation is the group’s unexpected and unlikely cover of Depeche Mode’s “Personal Jesus,” which positions the classic synthpop song as a Def Leppard-styled rocker but still faithful to the original. Overall, there’s hardly anything to complain about this package: it’s all the great hits and more to make you nostalgic for that era of big hair and denim.