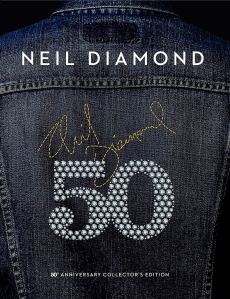 Last year, Neil Diamond released a 3-CD retrospective, 50th Anniversary, which celebrated his five decades as a recording artist. This time, the legend has put out a new version of that collection, now expanded to a whopping 6-CD set of 115 songs–including 15 previously unreleased tracks. It’s all the hits and more: from his Bang Records mono tracks like “Solitary Man,” “Red Red Wine” and “Girl, You’ll Be a Woman Soon”—through the songs from his peak ’70s and early ’80s period like “Sweet Caroline,” “Cracklin’ Rosie,” “You Don’t Bring Me Flowers” (his duet with Barbra Singer), “Love on the Rocks,” and “America”; to latter-day recordings such as “Hell Yeah,” “Pretty Amazing Grace,” and “Melody Road.” Aside from the demos of “I Am…I Said” and “America,” the new box contains several previously unreleased tracks including “The Ballad of Saving Silverman” (Diamond himself appeared in the 2001 film comedy Saving Silverman); Glen Campbell’s “Sunflower”; and “C’est La Vie,” a collaboration with his Jazz Singer co-songwriter Gilbert Becaud. Of all the many Diamond best-of collections out there, 50th Anniversary Collector’s Edition surpasses them all in terms of the track selections and being the most career-spanning.