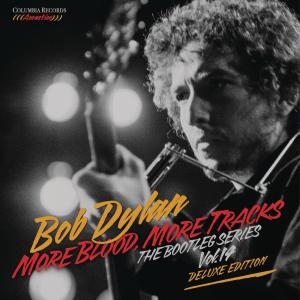 There have been previous Bootleg Series collections that Bob Dylan fans have been waiting years and years for release. And for the most part they’ve were rewarded, from the Live 1966 performances to The Basement Tapes eras. But this new one, More Blood, More Tracks, is probably the most highly-anticipated of them all, as it focuses on the songwriter’s masterpiece, 1975’s Blood on Tracks, a meditation on relationships. It’s still heartbreaking to listen to songs like “Tangled Up in Blue,” “Idiot Wind,” “Simple Twist of Fate,” and “Shelter From the Storm” more than 40 years later. The deluxe 6-CD version of More Blood, More Tracks is a mammoth 87-song collection containing the recordings from the New York City and Minneapolis sessions. A few of the recordings had been previously released on other Dylan collections such as Biograph and the first installment of The Bootleg Series, but otherwise this is everything associated with Blood on the Tracks: multiple takes of the original album’s 10 songs, as well tracks that didn’t end up on the final version such as “Up to Me” and “Call Letter Blues.” It’s fascinating to hear how the songs evolved, from just Dylan and his guitar, to him recording with the full band; there are moments when the listener feels like he or she is a fly on the wall inside the studio as Dylan is working on the song in progress. Whatever the tracks’ incarnations are on this set–from a solo performance to the final take–the message and lyrical themes of these poignant works remain timeless and truly cuts to the bone emotionally and musically, whether it’s the vitriolic “Idiot Wind” or the devastating “If You See Her, Say Hello” (If 87 tracks seem overwhelming to the casual fan—but certainly not to Dylan-philes–there’s a single-disc version that’s just as sufficient and satisfactory as the boxed set).