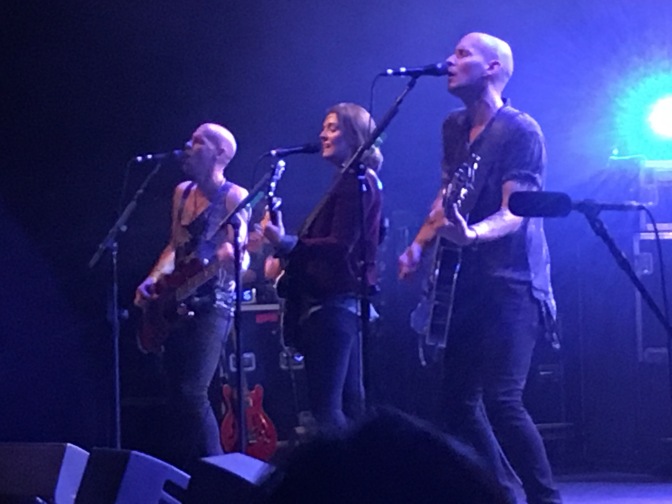 If Brandi Carlile is a compelling singer on her records, then her guise as a performer on stage is on equal footing, perhaps taking it up a notch. Either way, you can’t help but feel swept up by both the tenderness and passion in her delivery. Such was the case with her performance of “The Joke,” off her recent excellent album By The Way I Forgive You, this past Thursday evening at Prospect Park. When Carlile hit and sustained the high notes on that very emotional and timely song, it was a cathartic and jaw-dropping experience. Against a powerful anthemic rock and orchestral backdrop, she was summoning all of her strength to make the audience feel there’s hope and empowered amid dark times. It was a vibe that dominated her electric set.

Carlile returned to New York City for an hour-plus show as part of the Celebrate Brooklyn! Series (she performed a three-night stand the Beacon earlier this year), and all through the show, the enthusiasm she and her band–including longtime collaborators Phil and Tim Hanseroth on bass and guitar respectively–never wavered following the opening number “Every Time I Hear That Song.” A majority of the songs from the set list drew from By the Way I Forgive You and rightfully so because of its concept of forgiveness, which in this current political and social climate seems such an impossible task.

As with “The Joke,” Carlile also gave voice to marginalized people in her performances of “Sugartooth” and “Fulton County Jane Doe.” She also spoke tenderly about being a gay parent on the song “The Mother,” written about her first daughter Evangeline. The singer threw in two cover songs that were stylistically polar opposite of each other but nevertheless extraordinary: a beautiful unplugged rendition of Joni Mitchell’s “A Case of You,” and a show-stopping rocking version of Led Zeppelin’s “Babe I’m Gonna Leave You.” Towards the end, Carlile played the title song from her breakthrough album The Story, which celebrated its 10th anniversary last year; earlier in the set she also drew older numbers “The Eye,” from The Firewatcher’s Daughter, and “Raise Hell” from Bear Creek.

Along with the singer, the band was superb, highlighted Carlile and the Hanseroth twins performing three-part vocal harmony– an indication of their collective chemistry musically and personally. There was never a lull at any point during Carlile’s set as it achieved a delicate balance between soaring anthemic rock and intimate introspective folk; she made performing with such strength and charisma appear dynamic and effortless. If you never have been to a show of hers (like it was for this writer until last Thursday), don’t wait too long.

Introduction
Every Time I Hear That Song
Raise Hell
Harder to Forgive
The Eye
The Mother
The Joke
Have You Ever
Mainstream Kid
Sugartooth
Fulton County Jane Doe
A Case of You
Babe, I’m Gonna Leave You
The Story
Party of One
Hold Out Your Hand