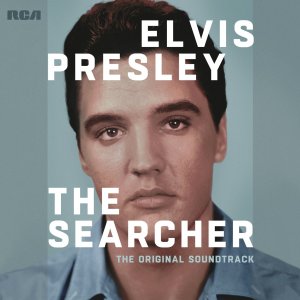 Elvis Presley: The Searcher is the soundtrack to the recent HBO documentary film of the same name, directed by Thom Zimny,” that re-positions the King of Rock & Roll as a true musical pioneer and visionary over his final years that had marked his decline and been the subject of tabloid fodder. By no means the soundtrack album is intended to be a greatest hits or definitive compilation of Presley’s music: rather, these are choice selections that give a historical overview of the phases in the singer’s career: beginning with of course, the breakthrough single he recorded for Sun Records, “That’s All Right,” through the groundbreaking hit singles when he landed with RCA Records, including “Hound Dog” and “Heartbreak Hotel.” Through The Searcher soundtrack, one could trace Presley’s musical evolution from untamed rock and roller (“Lawdy Miss Clawdy”) to a mature balladeer, as evident on “Are You Lonesome Tonight” and “It’s Now or Never.” His soundtrack and gospel work are represented respectively with the sexy and soulful “Crawfish” (from the film King Creole) and “Milky White Way” (from His Hand in Mine). During a fallow creative period in the ’60s, Presley even took on Dylan with his cover of “Tomorrow Is a Long Time.” Then Presley returned in a huge way with the ’68 comeback TV special, and a few of those vibrant performances are featured on this soundtrack, including the rocking “Trouble/Guitar Man” and that stirring finale “If I Can Dream.” Afterwards Presley was on a roll with another hit in “Suspicious Minds,” but the arrival of the ”70s also marked the beginning of the end, Yet still through the pain he was experiencing at the time, Presley still delivered some impassioned performances like on “Separate Ways” and “Hurt,” one of the last songs he would ever record from the Jungle Room at Graceland. A three-CD version of the soundtrack offers much more music, as well as songs recorded by other artists that inspired Presley, including Arthur Crudup’s original “That’s All Right,” the Blackwood Brothers’ “Rock-a-My-Soul,” the Staple Singers’ “The Weight,” and Odetta’s version of Dylan’s “Tomorrow Is a Long Time; excerpts of the film’s score by Pearl Jam’s Mike McCready are also included in this deluxe version. Like the film itself, which is highly recommended, The Searcher soundtrack offers a balanced and broader dimension chronicle of Elvis’ musical talents and genius that have been perhaps overlooked over the years.