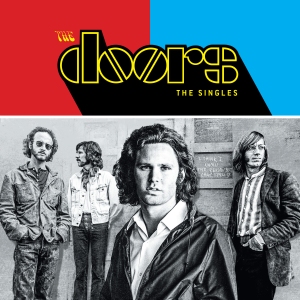 The Doors
The Singles
Elektra/Rhino
by David Chiu

Because the Doors’ music has been a staple of AOR or classic rock radio, it’s easy to forget that the band consistently delivered singles during its short lifetime between 1967 and 1971. So that’s what makes this latest Doors compilation–released during the band’s 50th anniversary year– unique in that it collects all of the the Doors’ 20 singles. Among them are  the number hits smashes in “Light My Fire” and “Hello, I Love You”—and paired with their original B-sides. If you own the first six Doors albums, then you mostly have all of the material from The Singles (i.e., “People Are Strange,” “Love Her Madly,” “Love Me Two Times,” “Roadhouse Blues,” “Riders on the Storm,” and “Touch Me”). Still, there are a few B-side tracks that have never appeared on the original studio albums, particularly “Who Scared You and a cover of Willie Dixon’s “(You Need Meat) Don’t Go No Further,” that would make it attractive to those who don’t have them. Interestingly, other iconic tracks like “L.A. Woman” and “The End” were never released as singles—certainly because of their length—which is why they’re absent on ‘The Singles.” Perhaps for the first-time ever on a Doors collection, The Singles also features the singles released by the surviving members of the Doors following Morrison’s death in 1971 off of the final two albums Other Voices and Full Circle–such as the highly-charged “Tightrope Ride” (in which keyboardist Ray Manzarek delivers a gritty vocal performance echoing his former bandmate at times), the rollicking and bluesy “Variety Is the Spice of Life,” the soulful “Get Up and Dance,” and the quirky Latin-like “The Mosquito.” Had this version of the Morrison-less Doors had been under a different name, maybe those singles might’ve had a shot, but to continue on without Morrison was a tough sell. The Singles also features live tracks that were released in the late ’70s and early ’80s—a period of rekindled interest in the band–such as “Gloria” and “Roadhouse Blues”–as well as mono radio versions of “Touch Me” and “Tell All the People.” A special edition of The Singles also contains the 1973 The Best of the Doors album mixed in Quadrophonic sound on Blu-ray. For the fan that has everything, The Singles may seem superfluous; but for others, it’s an opportunity to get reacquainted with the band’s best work along with a few surprises and discoveries.