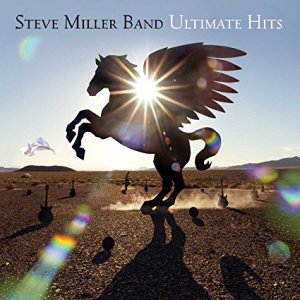 Whether it’s late ‘60s psychedelia, ‘70s classic rock, or ‘80s New Wave, Steve Miller’s music is truly rooted in the blues. The key to his success is his uncanny ability to transform blues-influenced music into something quite accessible and catchy.  Miller’s distinctive guitar work and infectious hit songs in his long body of work have deservedly earned him a place in the Rock and Roll Hall of Fame—and it’s those qualities that define this latest hits collection. Ultimate Hits marks his renewed association with Capitol, the label that had been the home for the majority of his recording output. Particularly on the 2-CD deluxe version (there’s also a single one as well), Ultimate Hits offers a broad and diverse overview of Miller’s catalog. It’s an opportunity for newer listeners who only know him for the wildly successful Greatest Hits ’74-’78 to get to reacquainted with Miller’s earlier work from the late ‘60s that was part of the San Francisco underground/FM rock radio sound–such as “Living in the USA,” “Gangster of Love,” and “Space Cowboy” (those three tracks are included on this collection as previously unreleased live versions), “Journey From Eden,” and “My Dark Hour” (which features Paul McCartney providing instrumental assist). But it was the 1973 album The Joker that turned Miller from a cult artist  to a mainstream star thanks to the memorable title track (whose lyric of “the pompatus of love” has become part of pop culture lexicon). Then came the period when Miller was a virtual unstoppable hit machine in a short amount of time between ’74 and ‘78, similar to that of Creedence  Clearwater Revival, Elton John,  and the Bee Gees–songs that have remained as staples of classic rock radio, like “Fly Like an Eagle,” “Rock ‘n Me,” “Take the Money and Run,” “Jungle Love,” “Jet Airliner,” and “Swingtown.”  1981’s Circle of Love album (whose song, the surf-like “Heart Like a Wheel,” is featured on the new set) was a bit of a commercial disappointment, but the following year Miller rebounded with the number one smash “Abracadabra” (fortunately the 2-CD set edition contains the full five-minute-plus album version of the track). While certainly a guitar virtuoso in the blues and rock traditions, Miller was kind of ahead of the curve when it comes to employing technology; cases in point are those groovy synth interludes like “Space Intro” and “Threshold.” From the ‘80s through the present day, Miller kept rolling on despite changing trends and a less-than-prolific output, from the glossy-produced yet socially relevant “I Want to Make the World Around,” an update of “Fly Like an Eagle,” from 1986’s Living in the 20th Century, to the back-to-the-blues “Dont’cha Know” from 2010’s Bingo album. In addition to “Space Cowboy” and “Gangster of Love,” several other unreleased tracks grace Ultimate Hits, including a demo version of  “Take the Money and Run” and live performances of “In the Midnight Hour,” “Baby’s Callin’ Me Home,” “Kow Kow Calculator,” and a cover of Wilson Pickett’s classic “In the Midnight Hour.” There have been previous Steve Miller compilations since Greatest Hits ‘74-’78, but Ultimate Hits is the most career-encompassing, and the unreleased tracks provide the Miller completist an incentive to pick this one up. Steve Miller is a pioneer in the birth of classic rock radio, and this collection is the proof; it’s a rollicking and enjoyable set that has been the soundtrack of many car rides in America for decades.