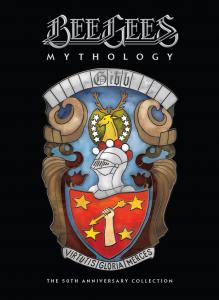 The Bee Gees’ Mythology, released to coincide the 50th anniversary of the Brothers Gibb as a musical act, is not your typical boxed set. What makes this unique is the fact that each of the four discs is devoted to a brother, including the late Andy Gibb, who was never really formally a Bee Gee, but whose career was certainly impacted by his siblings’ contributions. The selections picked by Barry and Robin on their respective discs lean both towards the obvious smash hits (“Stayin’ Alive,” “How Deep Is Your Love,” “Night Fever,” “You Win Again,” “Jive Talkin’”) and some of the earlier songs (“Odessa,” “Run To Me,” “Holiday,” “I Started a Joke”), and even some obscure fare (“Barker of the UFO,” And “The Singer Sang His Song”). The interest to die-hard fans and even some of the casual ones is the third disc spotlighting the late Maurice Gibb, whose tracks were poignantly picked by his family. Somewhat of the more quiet, low-profiled of the three Bee Gees, Maurice’s importance and talent comes to light here on this disc, verging between vintage ‘70s pre-disco tracks (“Suddenly,” “Trafalgar”) and more contemporary stuff (“Closer to Close,” “Dimensions” and the appropriately-titled gem “Man in the Middle.”). Poignant here are two previously unreleased tracks, “Angel of Mercy” and “The Bridge,” which are quite lovely. The same can be said for the music of Andy Gibb, which is essentially a greatest hits collection on Mythology—his music was selected by his daughter Peta. Aside from the younger brother’s late ‘70s popular hits, the disco-laden “Shadow Dancing,” “I Just Want to Be Your Everything” and “(Love Is) Thicker Than Water,” there are some rare tracks such as a duet with Olivia Newton-John (“I Can’t Help It”), and two tracks shortly recorded before his death in 1988 that would have marked his comeback: “Man on Fire” and the previously unreleased “Arrow Through Your Heart.” It’s heartbreaking to hear Andy’s songs in the context of his short life, but like the music of his brother Maurice, the set provides an appreciation of the full body of his work. Granted Mythology is not an all encompassing retrospective–rather it serves as a personal portrait of a brilliant pop music family dynasty.