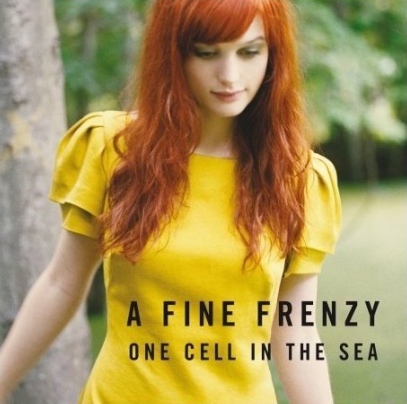 A Fine Frenzy (a.k.a. singer Alison Sudol) will be performing a couple of shows in Washington state and California in July for the Lilith Fair. From the NewBeats archives, here is a interview with Sudol from 2007.

Alison Sudol of A Fine Frenzy
By David Chiu

“I guess if you went out into the wilderness, fell in love, got lost, got your heart broken and emerged to tell the tale, this album could be your own personal soundtrack.”

So said 22-year-old singer/pianist/songwriter Alison Sudol, the driving force behind the collective A Fine Frenzy, about the music on their Virgin Records debut One Cell In the Sea.Her description about her music is fitting because it covers a wide range of emotions—from melancholy to hope to yearning—complemented by distinctive piano playing and Sudol’s airy, soulful voice. It has drew enough strong notices for this newcomer to land a record deal; to have her songs played on television; and to perform on stages all over the country.

“It’s pretty spectacular,” Sudol said in an e-mail interview. “Getting to play for people that have never heard us before and getting a raw reaction. We’ve been getting such incredible responses from the shows… it’s a wonderful feeling.”

The songs on One Cell In the Sea, which was released this past July, have a very dreamy quality to them. “I try to collect words, images, stories, etc. on a daily basis,” she said of her songwriting, “and when my head starts feeling full I sit down at the piano and try to make sense of things. Writing is my greatest joy, it’s a constant friend and sometimes the only thing that will make me feel like I have a place in the world.”

Some of Sudol’s moments of introspection can be found on the album’s single, “Almost Lover,” which sounds almost like a torch ballad. Its aching lyrics goes: “So long my luckless romance/My back is turned on you /Should have known you’d bring me heartache/Almost lovers always do.” “I had a glimpse of love, lost it and wrote a song to try to understand what had happened,” explained Sudol of its origins.

Yet in spite of the melancholy from the above mentioned track and some others comes “Hope for the Hopeless,” a comforting and uplifting song. “A friend of mine was going through a very difficult time,” Sudol said. “I couldn’t offer much comfort with words so I wrote a song instead…”

Originally from Seattle, Sudol grew up in Los Angeles an only child. She said that music had always been a part of her life and listened to rock and pop (the Beatles, the Rolling Stones, Aretha Franklin and the Temptations) as well as classical and the avant garde (Philip Glass). “I basically listened to whatever my parents played,” she said, “and I’m so glad that I did. I learned about song structure and singable melody from some of the greatest writers ever.”

Sudol said that she didn’t have a formal musical education—it was at the age of 19 when she started playing the piano mostly on her own. As for singing she said: “The first time I sang loudly (as opposed to the whispering that I had been doing before, I was quite shy) was the time when I knew I had found the thing I was meant to do. I didn’t realize exactly what that meant until years later, but that’s when the fire started and nothing has dampened it since.”

Readers of William Shakespeare may recognize the band’s moniker from a line in A Midsummer Night’s Dream (“The poet’s eye, in a fine frenzy rolling doth glance from heaven to earth, from earth to heaven…”). “I thought it was a beautiful description of the writing process and a lovely name,” Sudol explained, “so I borrowed it.”

Sudol’s musical approach—the dominant piano sound and the personal lyrics— is likely to draw some references to previous female singer/piano players such as Tori Amos. “I haven’t heard a single upsetting comparison though I have heard some odd ones,” Sudol said. “I think it’s flattering. It means people care enough to want to bring you into the fold of things familiar and known. I don’t mind it at all.”

The story of how A Fine Frenzy got a label deal with Virgin Records is somewhat of a fairy tale in itself since only only a few people knew the group’s music at the time. “One of those people was Jason Flom,” she said, “at the time the CEO of Virgin Records. He heard the music and a few days later was in my living room, watching us play. The rest is history.”

After a summer of touring, Sudol is not exactly taking a break from further promoting A Fine Frenzy. First she and her band are scheduled to appear as a special guest of Brandi Carlile on VH1’s You Oughta Know Tour. (Both acts are slated to appear at the Fillmore at Irving Plaza in New York City on October 3 and 4). In addition to having her music performed on the television shows One Tree Hill and House, Sudol is appearing as herself on the season premiere of CSI:NY, with an airdate of September 26.

Asked what it was like to finally have her music released, she said: “Knowing the album is out there in the world is a strange and wonderful feeling. Being able to walk into a music store pretty much anywhere and find copies of the record on the shelves is pretty thrilling.

“It’s also a little bit scary, releasing something that took over a year of work (several months of writing and several more of recording) but a lifetime of experience to create into the world… It opens the doors to all sorts of things, good and bad. This is definitely the most exciting time of my life.”