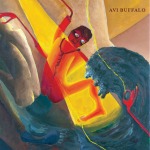 The music from this Long Beach, California band’s upcoming debut album seem to echo the trippy bands from the late ‘60s whose sound is heavy on atmosphere with some folk rock influences. (My pal Georgia made a comparison to Modest Mouse; I say a little bit of Love). What adds to Avi Buffalo’s distinct sound along with the angular guitar playing and jazzy keyboards is Avigdor Zahner-Isenberg’s singing: it has an androgynous, somewhat high-pitched, quality that is both emotive and intimately haunting. There’s a lot of strong tracks of note, especially the pop-friendly “What’s It In For”and the interestingly-titled “Summer Cum.”