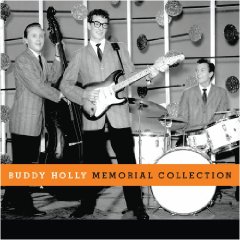 The songs on these two recent collections commemorating the 50th anniversary of Buddy Holly’s death sound so vibrant and alive. Memorial Collection is a 3-CD set spanning Holly’s entire career from his early recordings as a member of the duo Buddy and Bob, to his last solo works. In between are the great works he did with the Crickets, such as “Peggy Sue,” “Oh Boy,” “It’s So Easy” and “That’ll Be The Day.” For Holly-philes, Down the Line is a treasure trove of rare and previous unreleased works: for example, the first song My Two Timin’ Woman, was recorded when Holly was just 13! (You can tell by his voice on the recording). The last 15 tracks, especially “Dearest,” are particularly poignant since they feature Holly unplugged on just his voice and guitar. They were recorded from his apartment in New York City, just a mere few months before that fateful plane crash on Feb. 3, 1959.